The Importance of Service Frequency to Attracting Ridership

A few months back, I gave a presentation at the Canadian Urban Transit Association in Halifax. I examined the relationship of service frequency and ridership through a look at two very successful transit systems in suburban Toronto that have taken somewhat different approaches to transit service in recent years. Brampton Transit has established a grid of high-frequency routes that cover nearly the entire built-up area of the municipality. Meanwhile, York Region Transit has focused on two BRT corridors in the southern built-up part of its service area.

The presentation offers some arguments for transit agencies that will enable them to advocate for public investment in improved service.

The comparison demonstrates that adding service can have dramatic positive effects on ridership. Over the medium term, increased ridership can also make up most of the financial cost of additional service. Even though Brampton is mostly typical North American cul-de-sac suburbia, it has seen dramatic increases in ridership in recent years as it improved the frequency and service span of its key routes. 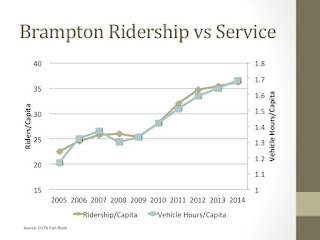 Here is one example of a route that saw spectacular improvement when service frequency went from about every 45 minutes to consistently every 30 minutes on a Sunday. The growth is striking because on Saturday, which saw no improved service, demand growth was minimal. This offers something of a natural experiment given that any external factors such as new development or demographic change would have affected ridership just as much on Saturday as on Sunday. 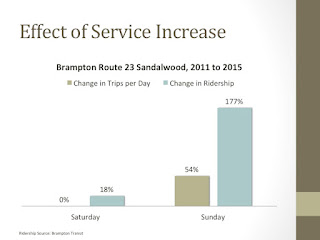 We can also clearly see that the ridership increase occurred following the service improvement, and the ridership growth tapered off in subsequent years as service stayed the same. Clearly, reliable transit on predictable schedules can have a very strong positive effect on people's willingness to take transit. 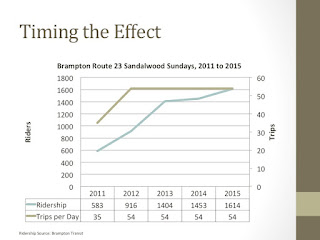 The presentation concludes with a simple regression that examines the effect of service on ridership. It compares the transit mode share in adjacent census tracts in the TTC and York Region Transit service areas. They are intended to act as proxies for transit service, since TTC offers a considerably more extensive service than YRT. Even controlling for population density and household income, there is a statistically significant positive relationship between being located in the TTC service area and transit mode share. In other words, the regression suggests that transit service is a key factor in determining transit ridership, and not merely population density and income.


Posted by Transit Futures at 7:52 PM No comments:

I just wrote an article for Urban Omnibus about the opportunity for an affordable extension of the 3 train in East New York.


"Imagine there were the possibility for the Metropolitan Transportation Authority to extend a subway line to a major concentration of new affordable housing — and a neighborhood with some of the longest commutes in the city — without building a single foot of new subway track.

"That chance exists right now in East New York, where the 3 train’s tracks continue nearly a half-mile beyond their current terminal at New Lots Avenue to the Livonia maintenance yard, near the Gateway Center mall, Spring Creek Nehemiah, and several large public housing projects. Using these tracks for passenger service would significantly enhance transit access to a major development area at a low cost, and spread the city’s current subway expansion program beyond Manhattan."

Posted by Transit Futures at 12:15 PM No comments:

Transit Futures
Jonathan English is a doctoral student of urban planning at Columbia University. His home is Toronto.